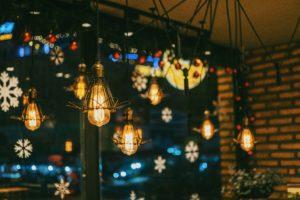 “Which company performed best this year?”

“Oh, the same as last year… What about the top ten?”

“Well, it’s also the same ten companies as last year but in a slightly different order.”

“Nothing new in the Electric Utility transition world then?”

“It’s not always about the top performers.”

“I am intrigued, what is it about?”

“Are you sure this is what you want to talk about over Christmas dinner?”

In 2021 we assessed the 50 most influential electric utility companies on their transition to a low-carbon economy. Comparing the results against our 2020 Benchmark findings, the top ten companies maintained their positions in the overall ranking while a few lower positioned companies received a significantly higher score in 2021 and climbed up the ranking.

NextEra Energy, a publicly listed company, headquartered in the United States of America, is the most improved company; it doubled its score and rocketed from 33rd place in 2020 to 16th in 2021. When the company was assessed for the first time, its climate governance was extremely lacking. Climate change and emissions reductions did not feature in the company’s formal annual reports, climate change risks had not been quantified, nor had scenario analysis or stress testing been undertaken.  Apart from a vague mention of reducing reliance on coal and oil, the company had not made any commitments to phase out fossil fuels at that time. The company’s emissions reduction targets could not be assessed as base year emissions had not been disclosed.

In 2021 NextEra has enhanced its performance on climate management – it implemented climate change incentives linked to wind and solar capacity targets for the corporate executive team; it conducted scenario analysis which led NextEra to commit to constructing 23 – 30 GW of renewables projects between 2021 and 2024.

“That’s a lot of gigawatts?”

“It is a lot to build in such a short period of time. For comparison, the total installed capacity of the leading company, Ørsted, is 9 GW. NextEra’s installed capacity is 55 GW and around 50% of its generation mix originates from wind, solar and nuclear sources.”

NextEra also significantly reduced its coal generation; it closed the Indiantown coal plant and converted the 1 GW Crist coal plant to natural gas. Three of its last four remaining coal plants will be closed by January 2024. The company is investing in the development of wind turbines with larger rotors, new power trains and bifacial solar panels which generate power when the sun hits either side of the panel, but also when the other side of the bifacial solar panel collects sunlight that is reflected off the ground.

One of the most pressing problems of the sector is energy storage. Energy is needed for the times when the sun’s not shining and the wind’s not blowing. The company believes that combining renewable energy generation with storage solutions will allow the US electricity sector to decarbonise by 2050.

“So why do you think this company has improved so much? What are the main driving forces?”

“Are the other most improved companies also based in the United States?”

“Interestingly, the four most improved companies represent four different regions, the other three companies are based in China, Germany and Saudi Arabia.”

Saudi Electricity, ranked 31st in 2021, compared to 45th in 2020, is the largest producer of electricity in Saudi Arabia, has a monopoly on the transmission and distribution of electric power in the Kingdom and is majority state-owned. In the latest assessment, the company demonstrated a remarkable transformation and, in this case, it would seem national policies played the most important part. Saudi Arabia pledged to become net-zero by 2060 and decrease its dependence on oil; the petroleum sector currently accounts for 42% of the country’s GDP.

Saudi Electricity has committed to transition towards a cleaner energy mix by fully replacing liquid fuel with gas by 2030. Additionally, the company announced investments of approximately USD 1.9 billion in renewable energy integration projects, which will contribute to growing the grid’s renewable energy capacity to nearly 19 GW by 2025.

“That’s impressive progress, especially considering all the operational challenges posed by the pandemic.”

“We’ll be following this company and hopefully watching its transition to the low-carbon economy in the forthcoming years.”

Another interesting company to keep an eye on is EnBW, a majority state-owned company headquartered in Germany. It is ranked 15th in 2021, 16 places up compared to 2020. EnBW has developed a detailed low-carbon transition plan, which includes plans to phase out coal and increase renewables capacity. The company has improved its climate commitment by increasing the ambition of its emissions reduction targets; in October 2021, EnBW joined the Science Based Targets initiative (SBTi) and we anticipate the next step – the alignment of the company’s emission reduction targets with the ambition of a 1.5°C scenario – will be taken very soon. Among other improvements, the company is expanding its low-carbon business activities. In January 2021, it launched EnBW mobility+, a wholly-owned subsidiary working on the expansion of quick-charging infrastructure in urban areas across Germany. EnBW provides access to over 150,000 charging points in Europe from renewable sources. Other subsidiaries provide home storage systems for solar power plants in Germany and equip private households, commercial enterprises, and municipal properties with smart meters.

“These companies demonstrate their commitment to transition, don’t they? Why did they not make it to the top 10? How can they improve even further?”

“Transformation across all aspects of the company’s business is required to align with a 1.5°C world. Most electric utility companies haven’t reduced emissions fast enough in the past five years and it doesn’t look like they will in the next five. These companies also don’t have emissions reduction targets that are ambitious enough to achieve decarbonisation within the timeframe required by the Net Zero scenario developed by the International Energy Agency. Persistent reliance on coal and oil, as well as natural gas as a transition fuel, means that 98% of the 50 assessed companies will exceed their carbon budget by 2035.  The companies rarely assess their climate-related risks in financial terms and poorly disclose their mitigation research and development expenditure. Investors and stakeholders need to understand the amount devoted to mitigation technologies, specifically to non-mature technologies because more investment is needed to develop, scale-up and commercialise emerging technologies.”

“Did you have any companies that worsened their climate-related performance since the previous assessment?”

“Yes, more than a dozen, but that’s not as fun a topic to discuss over a Christmas dinner. Let’s give those companies another year to improve.”

In the meantime, if you want to know more, please visit the WBA website