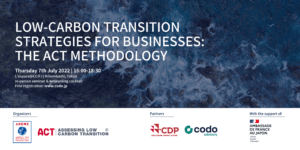 After local programs in Europe and the Americas, the ACT Initiative is developing from this year its presence in Japan, with the support of local partners.

As a first step, ACT co-developers ADEME and CDP introduces the methodology in an event organized in Tokyo on 7th July, for an audience of 100 participants from Japanese companies, financial institutions, policymakers and NGOs.

In addition to ADEME and CDP, speakers include the Japanese Ministry of Economy, Trade and Industry, the Embassy of France in Japan, two Japanese companies involved in ACT methodology roadtests – AGC and Nippon Paint, and Codo Advisory, the first ACT-certified consultancy in Japan.

This event is organized by ADEME, in partnership with CDP Japan and Codo Advisory, with the support of the Embassy of France in Japan.